Wismar – Hanseatic town on the Baltic Sea between Lübeck, Rostock and Schwerin 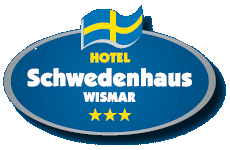 The marketplace is 10,000 m2 area one of the largest in northern Germany. On the north side of the square is the town hall. In 1807 the left wing of the late gothic predecessor building collapsed. According to plans of Ludwigsluster yard and land architect Johann Georg Barca the town hall in classical style was rebuilt in the period 1817 to 1819.

The still usable Gothic building remains were included, inter alia, in the basement in the new building. At the town hall basement is the permanent exhibition “Wismar – pictures of a city”. Here you will discover interesting local history. The exhibition is open daily from 10.00 to 18.00 clock (Tel .: 2 25 51-30). 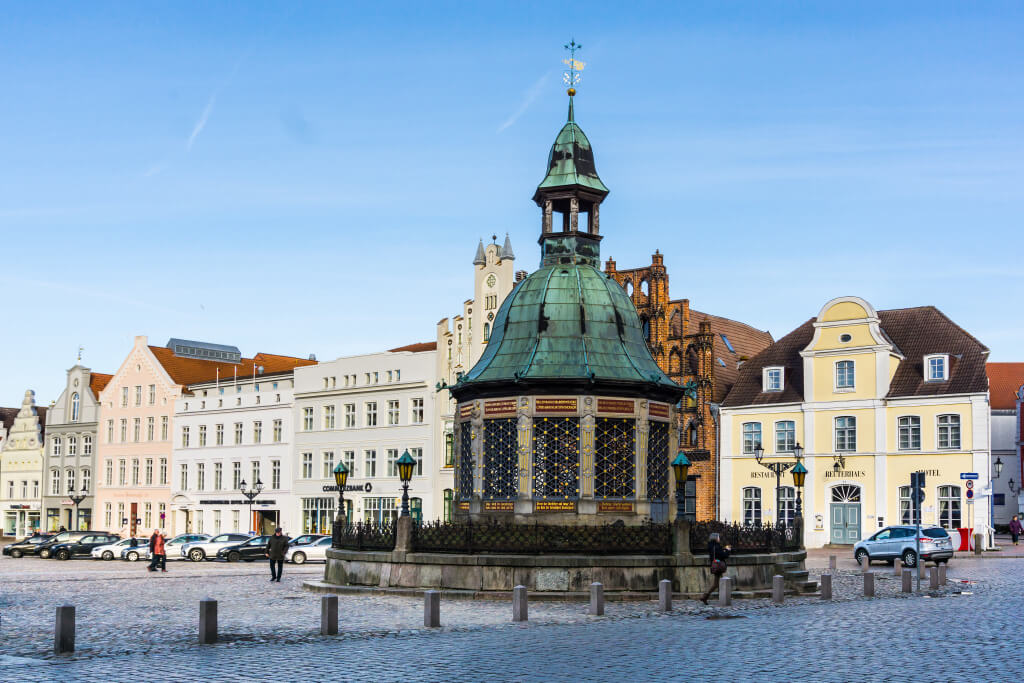 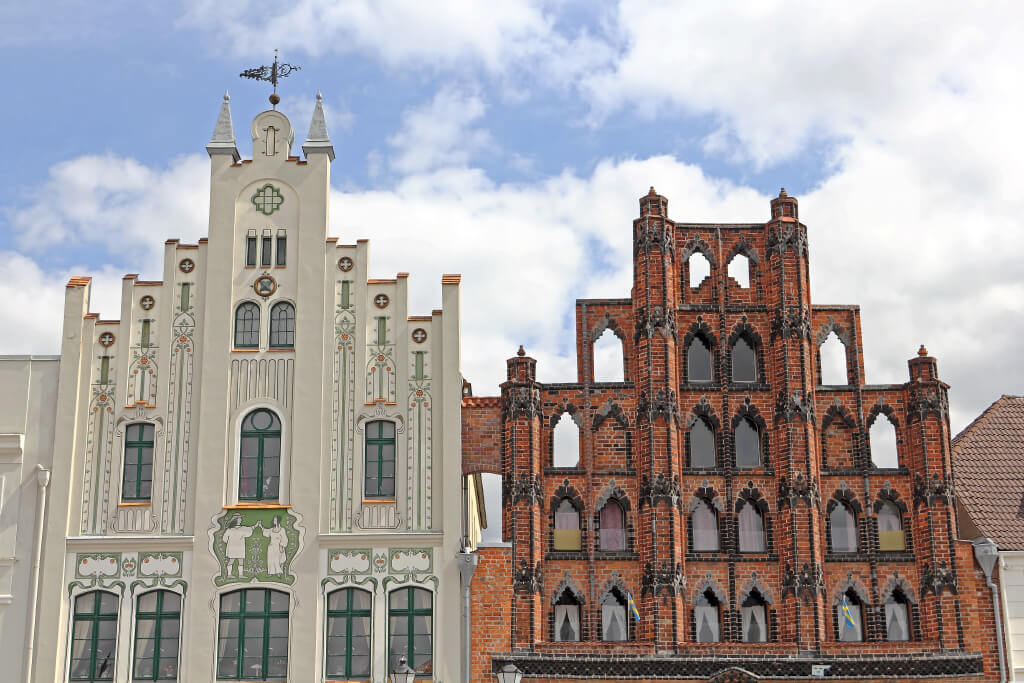 The “Old Swede” was built around 1380. In the Middle Ages were on the ground floor residential and business premises, located about storage shelves. Only 1878 when moved an inn, the building was called the “Alter Schwede” in memory of the Wismar Sweden period 1648-1803. 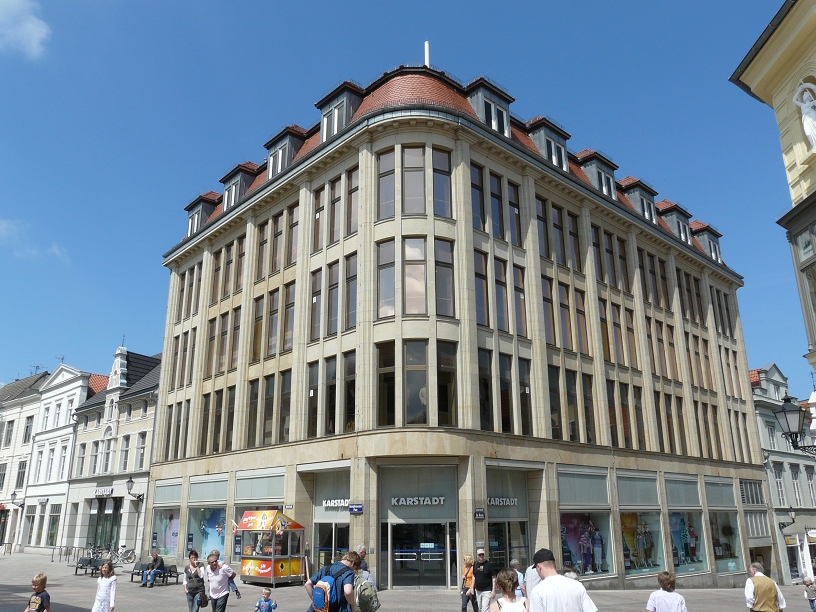 The building, built in 1355, was designed around the year 1575 in the Renaissance style and demonstrably served as a wine merchant since 1648. Of particular interest is the hall of the “vineyard” with its painted ceiling beams (1648).

The four-storey Art Nouveau building Krämerstraße / corner Lübsche road is the parent company of Karstadt AG. Rudolph Karstadt founded here in 1881 with just one employee his later empire. He also introduced the then unusual business policy of cash. The name of Chandler Street with its many remarkable gabled houses refers to the past and present use as a shopping street. 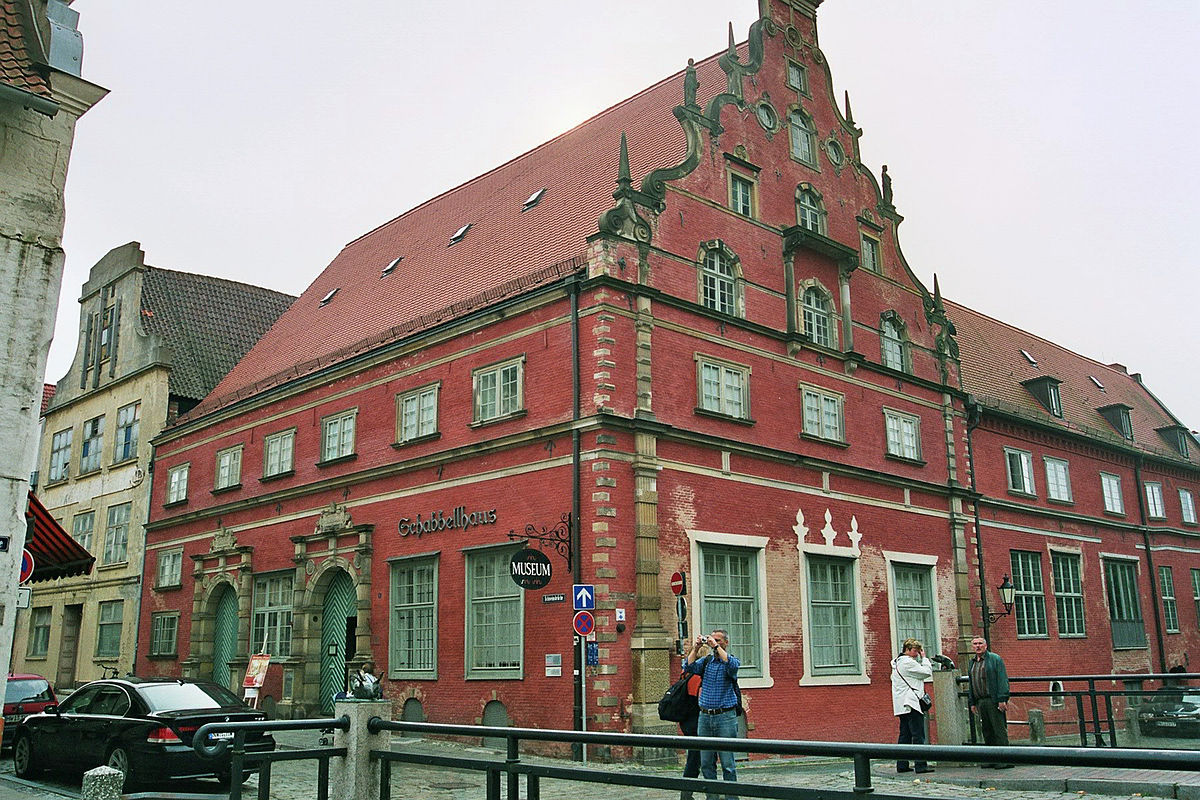 The Schabbellhaus was built from 1569 to 1571 according to plans of the Utrecht builder Philipp Brandin as a brewery and a residence for the later Wismarer mayor Hinrich Schabbell. It is one of the earliest Renaissance buildings in the Baltic region, showing the usual in the Netherlands Material combination of brick with decorative sandstone elements. Today it houses the Museum of City History. The collections and exhibitions of the museum reflects the culture and history of the Hanseatic City of Wismar and the surrounding region. One of the largest medical history collections of North Germany forms a special collection of the museum.

Your 37-meter-high central nave is the fourth highest nave Germany. With the construction of the present church was begun in the 14th century. Originally, the tower had a slender ridge turret, which in 1703 fell victim to a hurricane. By the collapse of the tower also large parts of the interior were destroyed, which can then replaced in the Baroque style. St. Nikolai was the church of boatmen and driving people.

1815 was built on the territory of the former Swedish fortifications financed from donations Lindengarten. The old tree population and the many benches invite you to linger. Especially beautiful are the paths created by the mill stream.

The water gate is the last of five gates, which were incorporated into a 4 m high walls. The following 1450 a predecessor Gate was built in late Gothic style. While the gate still has a typical late Gothic stepped gables to the city side, the rebuilt around 1600 north gable shows in the form of a triangle. Both gable facades are decorated with panels and two coats of arms.

The tree house is a baroque building from the mid-18th century. The square building with two heads Sweden before the portal takes its name from the earlier BEEN here turnpike. The “tree” was a floating Langholz, which served to close off the harbor entrance. It was closed during the night or in case of imminent danger.

A picturesque place near the Old Port. Here are colorful warehouses and storage buildings where there are restaurants and pubs.

Road Ensemble with valuable gables and eaves houses (including former storage and breweries) of the epochs of the Gothic to Classicism.

The armory is one of the most important baroque testimonies of Swedish military architecture in Germany. 1700 the old has been replaced by a new one after 1699 a massive, triggered by a strong thunderstorm Powder Tower explosion had destroyed the old armory. Of particular importance is the unique historical monument roof structure that allows its dual suspension design an unsupported floor of 60 x 15 m. The load of the roof so rests only on the perimeter.

The rectangular Gothic hall church was built in its present form in the 15th century, including some parts of the previous building. The interior is completed by a wooden painted ceiling. The baroque ceiling painting from 1687 shows Old Testament scenes. A good view of the church has from the backyard. Directly added to the church is the so-called “long house”. Originally built as a hospital, it was a long time as a nursing home.

The Fürstenhof was the seat of the dukes of Mecklenburg. Its present form is made up of two almost mutually perpendicular wings. The western wing, known as the “Old House”, was 1512/13. He is still arrested the late Gothic design principles. The “New House” was built between 1553 to 1555 in the Italian Renaissance style. It is richly decorated with sculpted limestone and terracotta jewelery. The three floors are separated from each other by figurative friezes. A rich sculptural refinement, on the portals of the gate entrance. After the assignment of Wismar on the Swedish krona in 1648 was from 1653 to 1802, the highest Swedish court for the Swedish possessions in northern Germany, the so-called Tribunal, set up in the Fürstenhof. 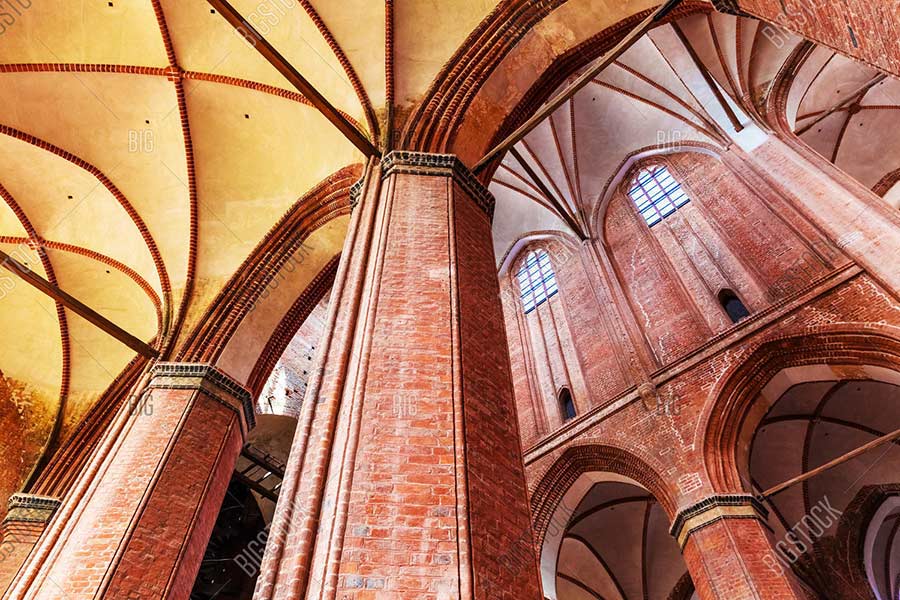 The St. Georgen Church is one of the three large main churches Wismar and an outstanding architectural monument of North German brick Gothic. It was once the church of the artisans and tradesmen. The origins of the St. Georgen church lie in the first half of the 13th century. Its construction therefore falls within the busy time of the late Middle Ages and the Reformation. In a centuries-long construction, the church was modified several times and in 1594 completed. During World War II the building was heavily damaged. Since 1990, the reconstruction takes place. 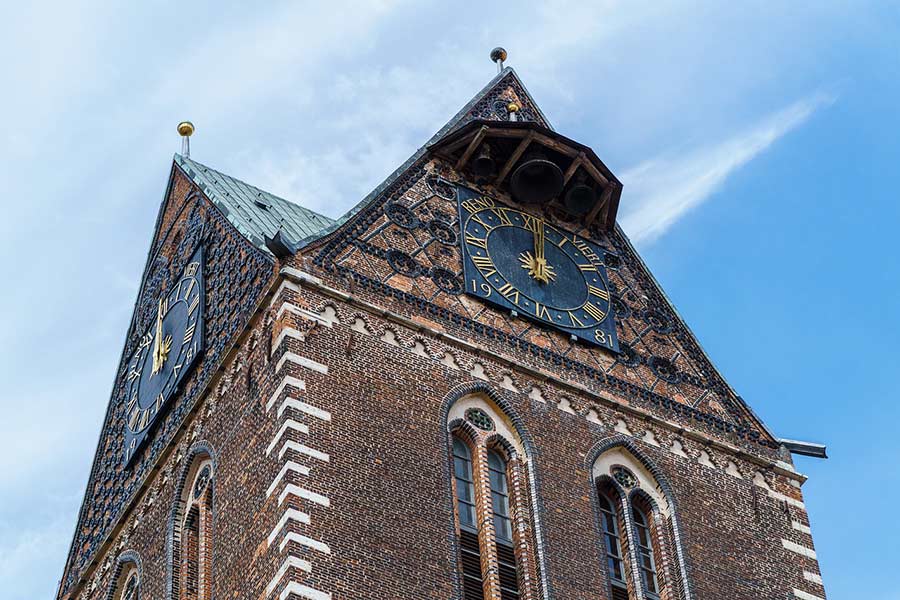 The 80 meter high tower of St. Mary’s Church is a highly visible landmark of Wismar. In WW2 the church was damaged and 1960. busted. Until then it was considered one of the finest brick churches in Northern Germany. The former council church was probably built in the first half of the 13th century. About the existing church is twice as large and twice the church was built in the early 14th century. The dials of the clock tower have a diameter of 5 meters. The movement allows each at 12.00 clock, 15.00 clock and 19.00 clock sounded one of fourteen hymns on the carillon.

She is one of the oldest artificial waterways Germany which pass through a city. About the millpond, the Wallensteingraben and Lostener See it connects the Schwerin Lake with the Baltic Sea. In the mid-13th century, created using fieldstone, the pit served for a long time for drinking and industrial water supply for the city dwellers. Your water powered mill wheels and was fire water reservoir.

As a former home of the archdeacon it was built around 1450 in the style of the north German brick gothic. Like many Gothic buildings around the Marienkirchturm the Archdeacon was in the Second World War severely damaged and reconstructed with considerable effort. Of particular importance is the richly articulated and decorated with lulls stepped gable on the north side.